We sincerely welcome complaints and compliments from anybody who has received either a poor or good service from Orwell. In this section you will find all the information relevent to complaints.

This policy should be read, in conjunction with Orwell’s Guide on How to Make a Complaint and the Complaint’s Procedure, as well as, Orwell’s Duty of Candour policy which applies to Health& Social Care providers registered with the Care Quality Commission. The Duty of Candour expects organisations to operate a culture of openness, transparency and to continually improve services and improve safety, listening and learning.

If you want to make a complaint, please fill out our complaints form here.

Orwell is committed to being compliant with the Housing Ombudsman Complaint Handling Code.

The purpose of this self-assessment is to identify where we are already compliant and identify any areas where we can make improvements. All questions were provided by the Housing Ombudsman.

The complaint handling code self-assessment was reported to Orwell’s Board on Wednesday 16th December 2020. 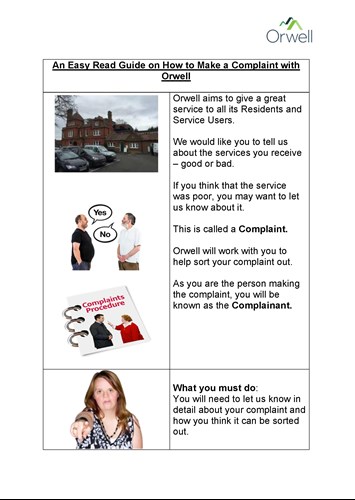