We're celebrating the United Nations International Day of Older Persons, from the viewpoint of one of our younger employees.

One of our Kickstart employees Harry, has been working with tenants at our service at Levington Court to find out more about their lives and capture their stories.  1 October is the United Nations International Day of Older Persons, so we asked Harry to tell us about his experience so far: 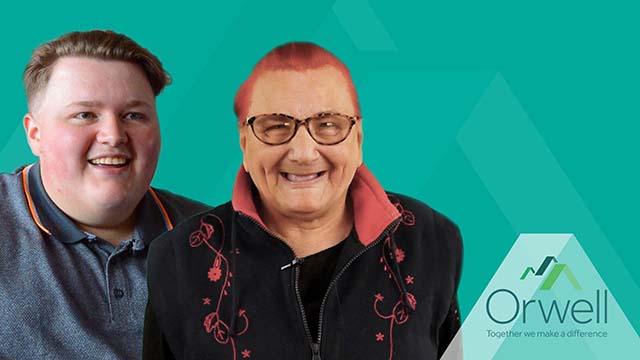 Recently here at Levington court I have been talking to our tenants to gain a ‘This is me’ sense of knowledge about them.

This allows our tenants to tell their stories as well as helping me to get to know them better and be more personable towards them.

You might see Orwell as an entity or our schemes as nothing more than buildings that you would never take a second look at, and to be perfectly honest before I started working here, I would have to admit that I was the same. But as the saying goes you can't judge a book by its cover.

Gloria is a tenant that I have spoken to here and was one of the first that I met when I arrived, which makes sense as she’s lived at Levington for 13 years.

Gloria told me that she met her husband William, at Levington.  She had first known him when she was 21 but they lost touch for around 25 years.  Upon moving in here she discovered to her amazement that he also lived here, the shock of her life I am assured but a good one nonetheless. Gloria describes living here as a place where she can do what she wants to do like going into town but if she needs any help she can always come and talk to the staff, she says that Levington court and the staff are like family.

No person is the same, just as all their personal stories are different. To say you can't judge a book by its cover is true, at Levington court there are 50 individual tenants each with their own personal story.

As a social media assistant at Levington I’m not directly involved in care but instead speak to the tenants more about their experiences here. Watching how the care staff have helped people in things that they need is inspiring.

On only my second day in the building I was sitting with some tenants in the main lounge and introducing myself a bit. One of the tenants was going out in his one-to-one session with a carer and was anxious about going outside, as due to Covid he had not left the building in nine months over winter and spring. I watched as he was worried and didn’t think he’d be able to do it and I had spoken to him about how it wasn’t as busy as normal this year because of everything going on with travel and holidays. He was apprehensive but his carer supported him to go out for a walk.

It wasn’t until the next day that I saw him, and he was really happy about where he went on his walk. He got to visit the seafront and went to a café where he had been going since he was a youngster and he saw a lot of people that he had not seen in some time. He was proud of himself and how far he had managed to walk considering how long it had been.

What the carer had managed to do helping him overcome this anxiety was to give him an experience where he had achieved a goal, and given him a great boost in his self-belief to do things that previously he would have shied away from.

In the words of Theodore Roosevelt ‘Believe you can, and your halfway there’.